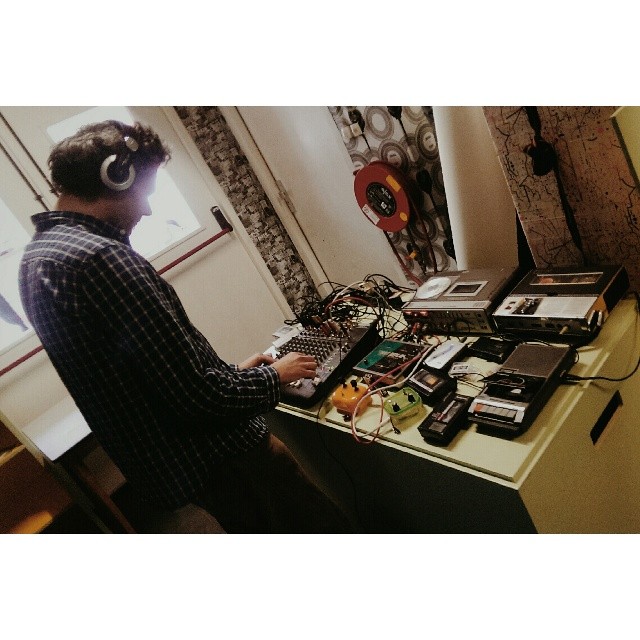 His work explores the relationship between body, space & time, how they interact & affect each other …
He works with photography, and the moving image, granularity and the search for a writing with light characterize his visual work…
His sounds experiments led him to deepen the physical effects of sound, taken out of any traditional musical context and narrativity. He uses home made sound generators, turntables (with & without records), field recordings made during his travels, tapes; …

In 2009 his work has been selected for the Tempus Arti by the art curator Jan Hoet ((Kassel Documenta IX). Following a conversation on the concept of time with his little boy, and influenced by texts of Zen philosophy and quantum physics, the installation consisted of three large photographs hung in the exhibition space, a film loop projected directly on the wall and accompanied by a sound creation …

In September 2012, he had a sound installation called Principe de vacuité (Principle of vacuity) on the main square of the medieval city of Huy, for the art festval Dédale.

50 chinese praying juke box & home made generators, in loop in an architectural structure.

In his latest film, “Fragments de lumière” – “Fragments of light” (2011 – 21 minutes), he choses to photograph bodies moving in a white cocoon, trying to find their own place, moving in a poetic gesture … then assemble these images into a 23.000 redial a time, a fragmented choreography … as in the ancestor of the film, chronophotography …

His new solo work “En temps réel”, is based on found and given tapes, field recordings, along with super 8 films from found footage & personal experimentation with this media…

It all started with tapes, found lying on the ground… Sound tests before lectures, or erased & recycled with remaining fragments of speeches (in many different languages, arabic chinese french russian… all mix together to create a new form of communication), small dictaphone tapes from answering machine or just containing hiss & noises…

Everything was there, waiting for a re-composition…

From banality to poetry…

Some past exhibitions & sound performances: