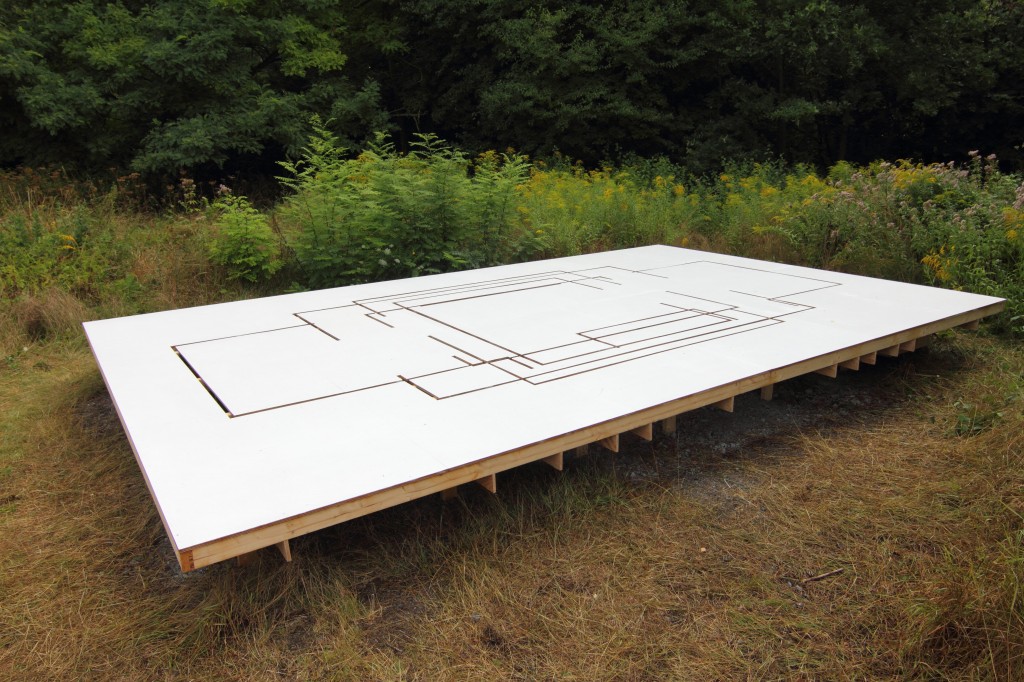 Notes to my work Paul Devens, February 2014 The possible manifestations of physical space and social context define the site-specific qualities of my work. To make a unique work in a given space makes it compulsory to engage a custom strategy to fit that specific situation in order to issue- and to unfold the distinctive qualities of that space. “Acousmatic listening”: Field-recordings of common sounds are being lifted out of its original context and implemented in a new one, by example of an installation. These are architectonic constructions, especially made for the physical experience of sound. Each installation features a soundtrack or composition of previously recorded sounds. The presence of an audience is integrated as part of the work. Phenomena are being part of the idiom of which my work communicates with, other than being the content of my work. An initial engagement of my work is being determined by the perception. The ‘being’ of particular spatial, visual or acoustical interventions – or a combination of those – discloses the deeper complexity of the work. The dialogue in between the condition (place, circumstances, biases, etc) and me is the motive of the artistic research. I issue what ‘place’ is, which kind of reality it represents in the understanding of the residents, audiences or users. Often this is in conjunction with matters from economy and history. I look for the appropriate terms to make a possible artistic intervention relevant. My work is interdisciplinary in the fields of composed sound, architecture, video and performance. I exhibit installations in museums, art-spaces and galleries, make interventions, sometimes commissioned, in public space, perform concerts in clubs, art-spaces and festivals, release CD- and vinyl-albums, sometimes cooperate with choreographers and other artists, and occasionally curate exhibitions and releases with other artists and thinkers. Paul Devens studied at the ABK and the Jan van Eyck Academy in Maastricht. His work has been installed, performed and screened at: le Magasin, Grenoble (France, 1994), LU, Nantes (France, 2000), Confort Moderne, Poitiers (France, 2001), Museum Z33, Hasselt (Belgium, 2002), Neuer Aachener Kunstverein (Germany, 2003) Marres, Maastricht (2000 & 2003), Ctrl_Alt_Del 1, 2 & 3 Istanbul (2003, 2005, 2007), Pause / Oboro Gallery, Montreal (2004) and OCA/ISP Oslo (2004), Love City, Tallinn, Salzburg, Maastricht (2006), Experimental Intermedia, New York (2006), Laptopia #4, Tel Aviv (2007), Kunsthal Charlottenborg, Copenhagen, Bureau Europa ‘Panels’, Maastricht (2010), Diapason Gallery, New York (2011), Radio Art Festival, Tallinn (2011), Resonance Network, Festival of Flanders, Kortrijk, Audio Art Festival Krakow, Lydgalleriet, Bergen, Jan van Eyck Akademie, Maastricht, NovemberMusic Den Bosch (2012), Z-out / PIT Z33, Borgloon (Belgium, 2012), Biennial of Bosnia – Herzegovina (2013), etc. Paul Devens The practice of Paul Devens positions itself in between installations, with sonic and architectonic elements, electro-acustic performances, video and composed music. Devens studied at the Academy of Fine Arts Maastricht and the Jan van Eyck Academy. His work has among others been exhibited at Le Magasin in Grenoble, ctrl_alt_del in Istanbul and Experimental Intermedia in New York. www.pauldevens.com vimeo.com/user373225/videos info@pauldevens.nl