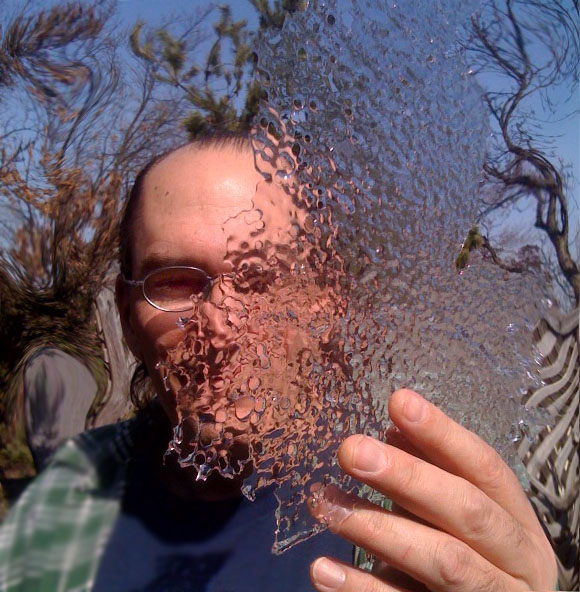 Since 1983  Illusion Of Safety has been the ongoing project of Daniel Burke, working alone and with various collaborators. They have released over 20 CDs on labels such as Complacency, Die Stadt, Experimedia, Odd Size, Silent, Soleilmoon, Staalplaat, Tesco, and Waystyx, and played over three hundred concerts in Europe and North America. IOS’ work has been called ambient, post-industrial, electro-acoustic, noise, sound collage, improvisation, and power electronics, but they are unwilling to limit their work to any given style or method. The sonic character and affective substance of the music will often shift abruptly within each recording and live performance.

Daniel Burke is currently working with conventional instruments, digital and modular synthesis, computer composition, samples, and highly amplified handled objects. He uses improvised and composed structures containing material that confounds memory and stimulates perception. The resulting music encompasses broken sound, disturbed ambience and unfiltered beauty that collectively evokes an awareness of the ineffable. The sound is an interactive language between listener and performer, open to interpretation. It is a bridge between humanity and technology, between music and noise.

Illusion Of Safety has existed and persisted since 1983, and like many projects of a certain age it frustrates attempts at pat summation. It began after Daniel Burke, a visual artist and music fan from Chicago’s northern suburbs, drew from Throbbing Gristle’s farewell concerts the impetus to make sound his vehicle for confrontation, self-discovery, connection, and transcendence. He first partnered with Mitch Enderle over their shared interest in grimy industrial sounds that articulated the grimness of Midwestern America’s hollowed-out manufacturing zones, but early concerts also included Thymme Jones, Chris Block, Jef Bek, and Rross Feller, all members of the rock band Dot Dot Dot, who were attracted to an opportunity to play music that wasn’t bound by genre conventions. The line-up, then and ever after, was fluid; members came and went and came back, In 1985 Mark Klein and Mark Sorensen joined for a time. Then in 1986 Jones and Burke formed the Complacency label and proceeded to document Illusion Of Safety on a series of cassettes; two years later the imprint released the first IOS LP More Violence And Geography and a DePaul University music major named Jim O’Rourke joined up. He brought an exacting ear, a precocious command of studiocraft, and patience that tempered Burke’s more impetuous, aggressive approach. After five years and six CDs that ran the gamut from Inside Agitator’s bracing blasts of samples to Probe’s immaculately paced contrasts between unidentifiable, subliminal sound and shattering instrumental events, he left to pursue his own projects.

A series of sympathetic but strong-willed collaborators joined Burke on stage and in the studio throughout the 90s, among them the revenants Thymme Jones and Mark Klein, the exacting Kurt Griesch, and the sphinx-like tabletop guitar maestro Kevin Drumm. IOS’s music from this period drew on elements of ambient and free improv without falling exclusively into any genre. It functions, in Burke’s words, “as a meditation, being immersed in the moment, an escape from too much mind.” Labels like Staalplat, Korm Plastics, and Mort Aux Vaches stepped up to facilitate the brisk flow of releases. 1997 was an especially productive year; Burke played 28 live shows, lectured at Mills College, and played some non-IOS shows with Thomas DiMuzio.

After the millennium turned Burke did an extensive European tour with Drumm that yielded another non-IOS collaborative CD released by Mort Aux Vaches. Now free to pursue liaisons outside of Illusion Of Safety and armed with the enormous resources of a laptop computer, Burke turned IOS into a mainly solo venture. He also placed it on a much more fitful schedule; between 2003 and 2008 he released nothing and performed quite sporadically. Since 2008 Burke has ramped up his activities both in and out of Illusion Of Safety. He’s made collaborative recordings with DiMuzio, Travis Bird, and the trio Tertium Quid with Bill Horist and Dave Abramson; toured for a season in his old mate Thymme Jones’ band Cheer Accident; performed concerts with Olivia Block and Jon Mueller; and revived Complacency to release the LP Offstrings: Inventions For Guitar. IOS’s new recordings, most notably the gorgeous 10” Sedation & Quell, distill the motives and methods that Burke has practiced throughout his career to their essence.

Notable recent performances include No Fun 2008, the Wroclaw Industrial Music Festival 2009, Sonic Circuits in 2010, and collaboration with Shen Wei Dance Arts performed live at the Metropolitan Museum of Art in June 2011.